THE STORY OF A NURSE 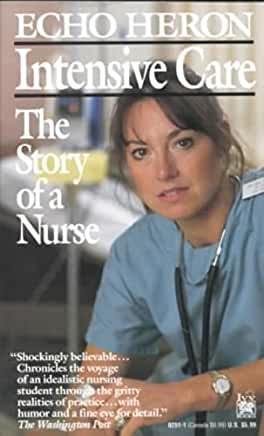 EXCERPT FROM THE NEW YORK TIMES BESTSELLER,
INTENSIVE CARE: THE STORY OF A NURSE:

"....Looking up I saw Dr. Skinner staring at us from the door. 'The head scan showed massive hemorrhage. The largest I've ever seen. Stop all the drugs. The family wants it that way.'
'Okay,' I said but didn't move toward the intravenous lines. He felt like an intruder and I wanted him to leave.
After a second he said, 'He was dead before he even hit the floor.' It was his explanation, his excuse. He shrugged and walked away.
Carefully letting down the side rails, I gently put my hands under the Colonel's shoulders and spoke to him in a slow, measured whisper. 'Did you feel all this love here today? You can leave this behind you now. It's all right, I promise.' My face touched his, 'I'll stay with you. I'll be right here.'
A soft buzzing drifted through the room, demanding attention as a small red light flashed in harmony to the sound. Blood pressure 40, heart rate 32. I squeezed his hands and felt a pressure rise in my throat. The blurring image of his face was changed and molded through my tears.
I turned to the pole holding the blue intravenous fluid, the one that kept his blood pressure up, and turned the plastic stopcock to the off position; then the yellow fluid, the one that kept his heart beating smoothly...off.
'All the pain is over for you now. Let it go. Let go.'
His skin was almost white, and the ring of blue surrounding his pupils had disappeared, leaving only the gray-black window open to finality.
Again the monitor flashed and buzzed as the agonal rhythm, the rhythm of death, slowly snaked its way across the screen ....right to left. Blood pressure...zero. The respirator seemed suddenly loud and obnoxious, diminishing the dignity of death. With one smooth, swift movement, I pulled the plug from the wall, creating silence.
For just a second his spirit and mine, patient and nurse, lived in that silence together. For just one moment I knew all the warmth and joy his spirit had ever given.
I removed all the tubes and tape from his body and washed him with the warm, soapy water reserved for the living. And as I bathed him, I softly hummed a lullaby, covered him with with a clean, soft blanket and said, 'Good-bye Colonel.'
Just after midnight I walked through the empty waiting room, feeling drained. Yet, as I descended the eight flights of stairs and walked out of the hospital into the crisp night air, I carried something with me. He had never spoken to me, there had been no gestures, I'd won no visible battles, but I had touched him, and his spirit...lingered."

INTENSIVE CARE; THE STORY OF A NURSE

Book of the Year 1988 American Journal of Nursing

SOME REVIEWS OF INTENSIVE CARE; THE STORY OF A NURSE

"A passionate and painful look at nursing by a woman who eloquently explains the good, the bad and the maddening about her profession." - Kirkus Reviews

"Shockingly believable....Chronicles the voyage of an idealistic nursing student through the gritty realities of practice...with humor and a fine eye for detail." The Washington Post

"Riveting....A first-person documentary that reads like a novel. A winning combination of medical anecdotes and personal observations....There's never a dull or preachy moment...could not be better reading." Anniston Star

"Dramatic...rings true...gripping account of training and ten years in the emergency and coronary care unit...and her burnout from physical and emotional exhaustion." Publisher's Weekly