NURSES ON THE MEDICAL FRONT 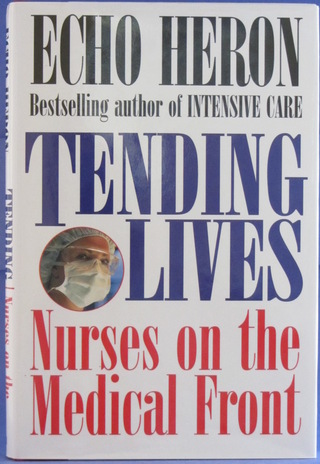 DIANE C.
I spread out a couple of sterile towels, on which I laid the nebulizer and the suction catheter. Twice I had to stop and using the casing from a used syringe, push out roaches that were attempting to crawl inside my shoes.
Slowly threading the catheter into the tracheostomy tube, I went as far as I dared and applied the suction.Several dark specks went through the catheter and into the canister. Old blood. The report had said the infant's intubation was traumatic and there had been a problem with blood clots.

I gave the baby a few puffs of extra oxygen before I went down a second time. When it came to infants' lungs, I was a fastidious housekeeper. I was rewarded with a large amount of mucus and a few more specks of old blood. As I was just about to pull the catheter all the way out, a clot larger than the rest shot by.
Suddenly I was furious. I wanted to lash out at someone; at the day nurse for having left four hours early without having done a thorough deep suctioning, and at the parents for having and then not loving or caring for this child. Didn't they know that children cannot thrive without nurturing? Can't they see that this infant was dying from lack of love?
I closed my eyes and took a long, slow breath. When the anger passed into sadness and the sadness passed once again into resignation, I disconnected the catheter and cleared the tubing with sterile water.
In my notes I would have to describe the clot in detail, and knowing the pediatrician on the case, knew she would insist on a specimen. I opened the canister and started to unscrew the top off the spcimen cup, when, out of the corner of my eye, I saw the clot unfold like a tiny, blossoming flower.

I swore at the overhead light and pulled out my penlight, shining it directly on the clot. Using a tongue blade, I fished around until I got ahold of it and slipped it into the specimen cup.
With the aid of my reading glasses, I made myself study the baby cockroach carefully. It was complete - all legs and antennaie accounted for. As much as I wanted to, I could not convince myself it was anything else...

Reviews of TENDING LIVES: NURSES ON THE MEDICAL FRONT

"Enlightening....reveals in a sometimes shocking and sometimes comical fashion what the caring profession is really like." Kirkus Reviews

"With candor, humor, and sensitivity, TENDING LIVES reveals what nurses witness and sustain on a daily basis. From birth to death, extreme despair to triumph, these nurses' bravery, heart, and unwavering commitment shine through." Palo Alto Daily News

TENDING LIVES is also available as an audio book