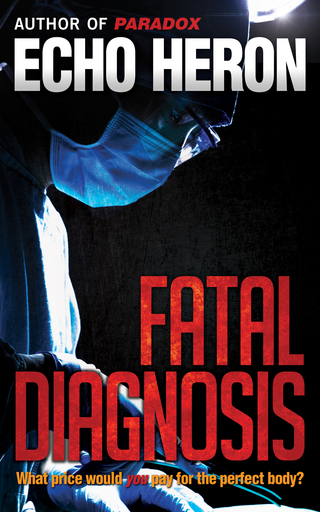 A COSMETIC SURGERY PATIENT COMPLAINS of an inexplicable rash...a pacemaker interferes with hospital equipment....a man is fished out of San Francisco Bay, his body disfigured by sharks...or by a twisted human with a very sharp knife...
On Ward Eight of Ellis Hospital, Nurse Adele Monsarrat uncovers a link between these cases. She won't know that the crimes she's investigating reach halfway around the world---or that she has already been added to a growing list of the terrorists' victims. For in an age in which cosmetic surgery can perform wonders, someone has discovered the ultimate transformation: Using the human body as the perfect disguise for terror.

"...Adele checked the IV solutions and, steeling herself, looked down. The face that had been shining with humor at her kitchen table less than twenty-four hours before was mangled almost beyond recognition.
She covered Wanda's hand with her own. It was like a block of ice. "Wanda? It's Adele."

The room went silent except for the bleeps of the cardiac monitor. The ER doc, wearing a splatter guard, leaned over Wanda's head, pried open the grossly swollen lids and shined a penlight into one pupil. Wanda's mouth moved and the doctor motioned Adele closer.
Adele put her ear next to Wanda's mouth. The stench of dried blood made her hold her breath. "Talk to me Wanda," she said, "Tell me who did this to you."
Air whistled in and out of the bloody hole as it worked to produce words. The issuing sound was horrible, made without the clarifying benefit of lips or teeth and with an impaired tongue.
"Wanda, was it the man we met last night who did this to you?"
Wanda was so still that for an instant Adele thought she'd gone unconscious. But then the hole moved and made a supreme effort to produce a single word: "Yeah".
The ER doctor locked the side rails and unlocked the wheels. Adele placed the portable monitor at the end of the bed and helped steer the gurney toward the door.
"Was he trying to get the pacemaker?" Adele asked, bending close to Wanda's ear. "Wanda?" Adele touched the woman's shoulder. "Wanda?"
The lack of response caused both the ER doc and Adele to push the gurney at a run..."

"..."Daisy yelled something, but Adele couldn't hear the words over the racing engine of the car - not that she could have answered; her mouth was dry and her throat tight. In a true panic, she concentrated on kicking at the trunk latch until she was sure she'd broken every bone in her foot.
With Daisy pawing at her back, she turned just as the car lurched forward. She kicked once, then again, and felt something give. At the same moment they were thrown violently back. Th car tilted at a sharp angle, then straightened out.
Only when the water began seeping in did Adele begin to scream..."

FATAL DIAGNOSIS
READERS' REVIEWS
"NEVER A DULL MOMENT! Heron manages to weave irresistible humor into even the most dire of circumstances. I love the antics of Nelson, the vegetarian Labrador Retriever. When he meets Helen, the deaf and blind cat, for the first time, it is absolutely hysterical. I have enjoyed several of Heron's other books and she just keeps getting better and better. A thoroughly engrossing and delightful read. The only question is: WHY isn't the publisher promoting Heron's books more vigorously? Her books belong on the bestseller lists." A reader from California

"As always, the author carefully develops the suspense and you will have no choice but to become riveted as the plot unfolds before you. I liked it and am looking forward to more in the series." A reader from Jeddah, Saudi Arabia

"A real thriller which makes you think What is going to happen next???" A reader from Delhi, India

"A SUPER BOOK! Anyone who enjoys reading medical mysteries and especially those who've enjoyed the previous installments of the Adele Monsarrat series, will enjoy this book. The characters, especially Adele, Tim and Cynthia, continue to develop in this page-turner!" A reader from Los Altos, CA