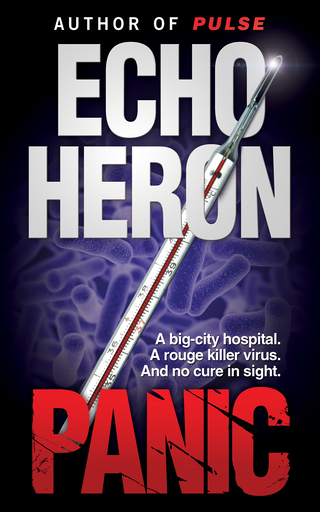 ELLIS HOSPIAL'S WARD 8 IS IN A PANIC. Only hours ago, teenager Iris Hersh was in perfect health. Now she hovers near death, ravaged by a virus that medical science has never encountered and doesn't know how to stop. As an entire hospital staff fights for Iris's waning life, the disease claims another victim - Cynthia O'Neil, RN, Adele's best friend. When more people are claimed by the rogue virus, Adele wonders why it seems so curiously selective. She joins forces with Detective Tim Ritmann, hoping to contain a potentially raging epidemic...

"...'Did you also know that most pens are a perfect place to conceal small amounts of cocaine or'...She looked up at him with a wicked, evil smile. '...other illegal drugs? Take even the most common of plastic pens.' She held up the one she had brought with her. 'They actually hold more than the heavier metal pens.'
Her smile turned into a grin, her eyes not moving from his.
He swallowed bile and sat down hard. It hadn't dawned on him earlier; how did she get a hold of a pen? She was maximum security. Nothing like that would have gotten past the guards...unless she'd concealed it in her vagina or rectum.
'You are a pig, Mr. Desmond, or is the politically correct term 'reptile' for lawyers these days? Do you really believe I would let you hire anyone to make me look crazy?
He shook his head, mesmerized by the intense blue eyes. Wasn't that how Charles Manson got his followers to do his bidding? Mesmerized them with his eyes?
'Ms. Sandel, why don't we stop now?' He began to gather his things. It was an effort. He felt dizzy and weak. 'I can come back later when you're feeling better. You seem tired and...'
Her eyes turned hard. 'I'm feeling fine, Mr. Desmond, how are you feeling? You look pale.'
He felt far away, and he had this peculiar sense of being smaller.
'How was that tea, Mr. Desmond? Was it strong enough? Did it have enough sugar?'
He gripped the edge of the table. Perspiring heavily, he attempted to raise his arm to motion for the guard, but didn't have the strength to get it off the table.
She was suddenly very close to him, robbing him of air.
In the dark of her shadow, his lips parted as his throat worked, trying to scream without breath..."

"ENTERTAINING MEDICAL THRILLER. Nelson is my hero!! I went straight from PULSE to PANIC and the excellent writing continues with numerous separate story lines bubbling along together and all eventually meeting for the final chapters. Definitely worth reading. I also find myself becoming a great fan of Nelson." -
A reader from South East England, UK

"YOU'VE GOT TO LOVE IT!! This was my first experience with Echo Heron. I thoroughly enjoyed this book. At it's inevitable conclusion, I immediately headed to the bookstore for PULSE and/or PARADOX - but to no avail. I assume the first to be sold out and the second to be in progress. Ms. Heron is a fabulous author." - A reader from Denver, CO

"In my opinion, PANIC is even better than Ms. Heron's PULSE. It's a well-written, compelling medical thriller!" - A reader from Stanford, CA

"Echo Heron knows nurses and understands nursing from the inside. I read her fiction work first, and it touched me as a nurse. This well-written thriller touched me as a medical mystery addict and left me wanting more." - A reader from Washington, D.C.

"PANIC is as suspensful and funny as PULSE. The characters' on-going stories are as addicting as the thriller series itself. I love Adele Monsarrat as a quirky nurse-sleuth. Hope there are more to follow!"
- A reader from Chicago, Ill.